(REVIEW OF 'THINKING, FAST AND SLOW' BY DANIEL KAHNEMAN)

A couple of years ago, pop pundit Malcolm Gladwell gave us Blink, his much-talked about theory on why we really don’t need to think too much, because – according to him – we have inside us a sophisticated intuitive mechanism that enables us to make spontaneous judgements that are as good as (if not better than) the most carefully cerebrated ones.

And, in support of this, Gladwell produced a delicious collection of anecdotes, like that of museum director George Despinis, who was able to intuit, at one glance, that the Getty kouros – an ancient Greek statue, authenticated by expert testing – was, in fact, a fake. Gladwell attributed this to something he termed “thin-slicing”: our supposed ability to make better decisions, with limited information and instant judgements, than we can with volumes of analysis and cerebration. It was, as is the case with all of Gladwell’s writings, extremely seductive. 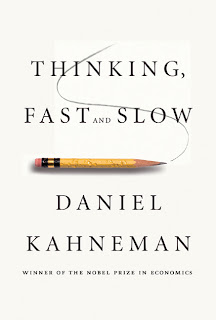 But now here comes Nobel Prize winner Daniel Kahneman to gently tell Master Gladwell that he’s quite wrong. Kahneman is arguably the most important psychologist of our time — a man who has helped change our understanding of cognitive psychology, decision-making and behvioural economics, and bridged a space between Sigmund Freud and Adam Smith. His book, Thinking, Fast and Slow, is magisterial: a distillation of four decades of research into an encyclopedic explanation of how the mind works. That may sound intimidating, but the real beauty of the book is the lucidity, richness and charm with which Kahneman presents all his material. One can read it as easily as a collection of short stories — which, indeed, it resembles, with its concise chapters, elegantly crafted prose and engaging anecdotes.
Kahneman’s thesis is that we have, inside our heads, two parallel, interconnected systems, “System One” and “System Two” which, between them, make all of our decisions. System One is fast, automatic, impressionistic, intuitive and arrives at snap judgements, with often insufficient or distorted information. System Two, on the other hand, is deliberate, methodical, carefully reasoned and deeply contemplative. They are like a Tweedledum and Tweedledee inside our heads. Or, come to think of it, uncannily like a Malcolm Gladwell and Daniel Kahneman.
The problem, however, is that System Two, which should really be in charge, is lazy (it has to be, because it uses up a great deal of energy). And it is perfectly happy to sit back and let System One run the show, which is something System One loves to do, in any case, rushing around, making 1+1 equal 2 … or 3, or 4, depending on the circumstances. Too often, System Two, instead of watching over System One’s impetuous follies as it should, and stepping in in times of need, is content to accept them, and even provide its own justifications for them.
Kahneman offers us a wealth of wonderful examples to illustrate all of this, ranging from the quirky to the downright scary. In one experiment, for example, done after a spate of terrorist bombings, one group of travellers was asked how much they’d be willing to pay for an insurance policy that would cover them against death. Another group was asked how much they would pay for an insurance policy that would cover them against death in a terrorist attack. The second group, quite illogically, offered a significantly higher premium than the first. It was, as Kahneman explains, an illustration of how the group’s System One, typically, replaced a complex question that it couldn’t answer with a simple one that it could answer: how frightened am I by the media stories of terrorist attacks?
If that is quirky, there are other, scarier aspects of how our minds work — or don’t work. Kahneman tells us that dumb luck accounts for much more of our lives than we realise, and yet we are naively, hair-raisingly, optimistic about our ability to affect our outcomes. For example, in another experiment, a group of senior CFOs was asked to predict the performance of the stock market index in the following year, by giving two numbers, one which they were 90 per cent sure was too high, and one they were 90 per cent sure was too low. It should have been easy enough and yet, worryingly, 67 per cent of the CFOs got it wrong. (Which probably helps explain the fact that a few years ago, when the Sensex was teetering around 20,000, a senior private banker – no names mentioned – was trying to convince me that I was wrong to think that the market was over-stretched!)
Too often, says Kahneman, we don’t know what we’re doing, and we don’t know why we’re doing it. So what does he suggest? Well, for that you really need to read the book. But one thing to remember is that when our System Two doesn’t effectively monitor our System One spontaneously (which it usually doesn’t), we need to engage it consciously to do so.
Or, in other words, to make sure that our own internal “Kahneman” keeps watch on our internal “Gladwell”, and prevents him from getting us into trouble, as he often does.