(REVIEW OF 'THE LITTLE BLACK BOOK OF INNOVATION' BY SCOTT D. ANTHONY)

As the saying goes, if the pace of change in your industry is faster than the pace of change inside your company you’re in deep doo-doo. And, as a corollary, if the pace of change in your professional peer group is faster than your own pace of change, then you, personally, are in even deeper doo-doo. That’s the fact of life in our new age of discontinuity (ask Kodak, or any of the 18,000 people who worked there until a few weeks ago). And that’s what makes this book so relevant.
Scott Anthony is the managing director of Innosight, a leading innovation and strategy consultancy, which has worked on developing innovations for companies like P&G and General Motors, so he seems to have all the right credentials to talk on this subject. And, being a consultant, rather than an author or academic, he has organised the content of his book into 28 modular, easy-to-internalise, workshop-like exercises. The way he puts it, innovation is rather like fitness: it’s all a question of getting into the habit, hence this “28-Day Plan”. It’s true. The book really does get you into the habit of looking at business more creatively. 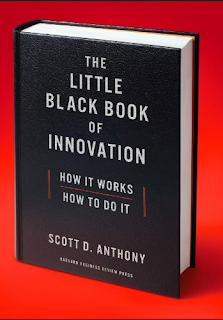 The first question Anthony asks is: how do you know when it’s time to start innovating? And the answer is that you need to keep scanning your radar screen for the first early warning blips because, as he says, “the urgency of innovation and the ability to innovate are inversely proportionate”. By the time a threat becomes big enough to notice, it is often too late to do very much about it. He cites the example of the US Postal Department, which is, of course, now mortally threatened by the Internet. So when was the right time for the Postal Department to have woken up to the need for innovation? Way back in 1994, Anthony says, when the new-born Netscape launched its first browser. Or, if not then, then certainly when it saw Netscape start to grow exponentially, a year or so later. “Anything that has doubled in size is a potential disruptor, regardless of size,” he says in one of the book’s many nifty business aphorisms.
There are several great strategic thought-starters in the book. For example, Anthony’s advice to look at “intersections” and borrow liberally from other business contexts. He gives the example of entrepreneur Rick Krieger, who spotted an opportunity for himself in the problems of the US healthcare industry in the 1990s and asked himself, “What would a McDonald’s of healthcare look like?” That provocative question led to the creation of an innovative healthcare business, with a chain of convenient, quick, affordable clinics, which he later sold off for a few hundred million dollars.
There are also lots of interesting cases that Anthony plays around with. One of the most thought-provoking is the Kodak story. It was not that the company was blind to the threat of digital imaging: it was already working on a digital strategy in the 1990s, even as its core photographic business kept on growing. In 2001, when Kodak was still in pretty good shape financially, it bought Ofoto, an online photo-album service, and it was, in Anthony’s words, “just two steps away from Facebook”. If only Kodak had pushed the idea a little further, he says, if only they had made it people-centric (instead of photo-centric), if only they had, indeed, heeded their own slogan, “Share memories, share lives”, business history would have been so different today.
Coming closer to home, another interesting case – illustrating Anthony’s dictum to look at “non-consumers” for ideas, rather than looking at consumers – is Godrej. In 2006, Godrej went to Innosight (one of whose key offices is in Bangalore, by the way) and asked, “How can we get out of our refrigerator death match with General Electric, Whirlpool and LG?” Innosight flipped the problem on its head: instead of competing with the biggies for 15 per cent of the market, why not look at the 85 per cent that did not buy refrigerators? The result was ChotuKool, an innovative, bottom-of-the-pyramid cooling device that is compact, portable, runs on a battery, is top-loading (so that its cooling doesn’t dissipate when the door is opened) and costs only about Rs 3,500, so that it’s accessible to the rural poor and slum dwellers.
This “Nano” of refrigerators has been shortlisted for the prestigious Edison Awards and is now being marketed, appropriately innovatively, through community networks and micro-entrepreneurs. I understand they’ve sold about 15,000 units in Maharashtra – which is not very much – but the company says their marketing thrust has only just begun, and they expect sales to grow exponentially. It is certainly an idea that deserves to succeed.
The Little Black Book of Innovation is one of the most thought-provoking business books I’ve read recently, one of those “whacks on the side of the head” that one needs from time to time. I have just one quibble: why are the photographs and graphics in the book so shoddy and amateurish? I really don’t expect this kind of shabbiness from someone like Anthony, or from a publisher like Harvard Business Review Press.