(REVIEW OF 'GREAT BY CHOICE' UNCERTAINTY, CHAOS AND LUCK - WHY SOME COMPANIES THRIVE DESPITE THEM, BY JIM COLLINS & MORTEN T. HANSEN)

Why did Amundsen make it to the South Pole and back in 1911, while Scott died trying? The answer, say the authors of Great by Choice, reveals why some companies thrive in hard times. Another potential Jim Collins classic.
In 1911, two teams of explorers set out to be the first to reach the South Pole: an English team led by Robert Falcon Scott and a Norwegian team led by Roald Amundsen. It was a race, in unpredictable conditions. The conditions were summed up in an advertisement that Scott had put in the London papers: “Men wanted for hazardous journey. Low wages, bitter cold, long hours of complete darkness. Safe return doubtful. Honour and recognition in event of success.” 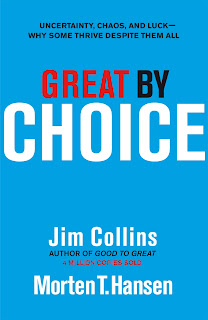 In the course of their epic race, the two teams apparently displayed significantly different behaviour patterns. While Scott used new-fangled motorised vehicles, hitherto untested in those sub-zero conditions (and which finally failed him), Amundsen used tried-and-tested dog sleds, which he had learned about from Eskimo tribes he had consulted. While Scott placed flags on his supply dumps to help locate them on the way back, Amundsen placed markers 10 miles around his dumps in every direction, for greater visibility. While Scott carried one thermometer (which broke at a critical moment, with disastrous consequences), Amundsen carried four backups. While Scott’s team marched long distances in fair weather, but took shelter in their tents in bad weather, Amundsen’s team made a strict discipline of marching 20 miles — no less, no more — every single day. The difference in these behaviour patterns led to dramatically different outcomes: Amundsen beat Scott to the South Pole by more than a month and returned home safely with his men to a hero’s welcome. Scott not only lost the race, but perished tragically with his team, just 11 miles from his extraction point. Collins and Hansen use this saga as a metaphor for the way different companies respond to conditions of turbulence, unpredictability and chaos.
Collins is, according to Fortune, “perhaps the most influential management thinker alive”, and his speciality is the study of “enduring great companies” — how they grow, how they attain superior performance levels, and how companies that are merely “good” can make the transition to “great”. His earlier books, Built to Last and Good to Great, are considered classics. And now Great by Choice picks up where Good to Great left off and asks the big, hairy question: why is it that some companies thrive on uncertainty and turbulence, while others cannot? It’s an enormously relevant subject today, as businesses the world over come to terms with the fact that, like it or not, chaos and disruption are here to stay.
The subject, admittedly, is not new. After all, Peter Drucker (who was Collins’s mentor) published his Managing in Turbulent Times as far back as 1980, and Tom Peters published his Thriving on Chaos in 1992. But the difference is that this book is typically Collinsian in its appeal: empirical, engaging, pragmatic and eminently implementable. Based on nine years of research, it identifies the unique behaviour patterns that have enabled select companies to become truly great over an extended period of turbulent time, and end up becoming what the authors call “10x companies” — that is, companies that achieved shareholder returns at least 10 times greater than their respective industry norms.
To do this the authors used a methodology similar to that of Good to Great: they chose a set of companies that achieved outstanding results while operating in highly volatile environments for a period of 15 years or more — companies like Southwest Airlines, Intel, Amgen, Stryker, Microsoft and Biomet — and compared them with a set of similar, but less successful, “control” companies, like Pacific Southwest Airlines, AMD, Genentech, United States Surgical, Apple and Kirschner. They then did exhaustive research into the behaviour of the two sets to discover their discriminators. And what they ultimately arrived at were what they consider the three key discriminators of a 10x company: (1) Fanatical Discipline, (2) Empirical Creativity and (3) Productive Paranoia. These, plus the “Level 5 Ambition” discussed in Good to Great, can all be learned and replicated.
One thought-provoking thing about the book is its rejection of the idea that innovation is the best route to success. In their comparisons of companies in the same industry, the authors found it was, indeed, almost always the less innovative — but more consistent — company that delivered significantly better returns over the long term. Sometimes, they suggest, it makes sense to be one leap behind.
Another interesting thing is the authors’ examination of “luck”, an issue rarely dealt with by a management book. The authors counter the common perception that luck plays a role in determining outcomes by pointing out that these 10x companies were not empirically luckier than their peers. What was dramatically different, however, was these companies’ “return on luck”, or what they did with the luck they got. The more prepared a company is to face an unexpected stroke of luck, good or bad, the better the results it gets when misfortune strikes: an observation that seems in sync with the book’s overall case for discipline, consistency, creative paranoia and the avoidance of unnecessary Big Bangs.
There are certain Indian companies I know for whom Good to Great has become a corporate bible. Great by Choice will take them on the next step up the learning curve.