REVIEW OF 'GOOD STRATEGY/BAD STRATEGY' - THE DIFFERENCE AND WHY IT MATTERS, BY RICHARD RUMELT

What makes good corporate strategy? Not wishful thinking but analysis, says Anvar Alikhan in this review of a book by “the strategist’s strategist”
Military history is a useful hobby for any CEO or corporate strategist. The Battle of Trafalgar, for example, was one of the turning points of world history. Napoleon Bonaparte was poised to invade England in 1805 and the only thing that stood between him and his prize was Horatio Nelson’s naval fleet. Nelson’s ships were fewer, smaller, and less heavily armed than Napoleon’s, and in a conventional battle they would have stood little chance. But Nelson devised a radical new strategy, which negated the strengths of Napoleon’s fleet while maximising his own strengths of manoeuvrability, innovative signalling techniques and seamanship. Instead of engaging in a conventional set-piece battle he sped head-on into Napoleon’s fleet, dispersed it, and then picked off the French ships one by one in close combat. The lesson for the contemporary businessman is obvious. 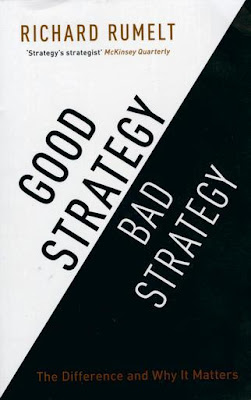 Richard Rumelt’s Good Strategy/Bad Strategy is interesting for many reasons, one being the excellent examples and cases. They are drawn not only from the world of business but also from military history and politics. (Strategy, after all, originally meant “the art of generalship”.) Rumelt is one of the world’s most influential thinkers on strategy. The McKinsey Quarterly calls him “the strategist’s strategist”. He trained as an engineer and worked at Nasa’s Jet Propulsion Laboratory before turning to management and teaching at the UCLA Anderson School of Management, both in California. Hence he is left-brained and rigorous in his approach — unlike some other strategy gurus.
Good Strategy/Bad Strategy, which was shortlisted for the Financial Times/ Goldman Sachs Business Book of the Year award, comes down heavily on what might be called “Dilbert strategies” — that is, fuzzy strategies based more on wishful thinking than on cold, hard analysis. These are obviously the “bad strategies” of the book’s title. They are worse than no strategy at all, because they create an illusion of direction.
Too many companies today, says Rumelt, are driven by such strategies. A strategy is not what you wish would happen, he points out, but “a clear and differentiated point of view that supports forceful and coherent action” — a plan of action specifically designed to move you from a carefully diagnosed Point A to a carefully cerebrated Point B. A strategy is also not a dhobi’s bundle of all the various things that different groups in the organisation would like to see done, but rather a sharply focused programme to achieve a few key objectives which will make the decisive difference.
Rumelt shows us how to create good strategies (and how difficult this really is). There are no simple tools, techniques or fill-in-the-blanks templates to generate good strategies, he tells us. They are born, instead, from deep insight and judgment, which can be stimulated by looking in the right places.
The book is organised into three sections. In the first, the author gives us a wonderful helicopter view of his thinking on the subject. The second section is where the real work begins, and Rumelt identifies the elements and drivers of good strategy and where to look for the leverage that enables a strategy to succeed — stuff that immediately triggers ideas to apply to your own context. The final section teaches how to “think like a strategist”, with insights on how to create, evaluate and execute good strategies. In the course of all this, Rumelt discusses nitty-gritties like the tools of anticipation, the concentration of effort, the importance of logic and how to build on competitive advantage. All of this is brought alive by Rumelt’s thought-provoking anecdotes and cases, of both “good” and “bad” strategies.
One example is Digital Equipment Corporation (DEC), once a leader of the minicomputer revolution, which by the late 1980s was losing ground to the competition. In the early 1990s DEC had a high-level discussion on strategy. Three schools of thought emerged, all equally strongly represented. The first argued that DEC had always been a computer company and should continue integrating hardware and software into systems. The second argued that DEC’s competitive advantage was its customer relationships, and it should therefore pursue a solutions-based strategy that solved customer problems. The third argued that the heart of the computer industry was the chip, and that the company should therefore focus on designing and building better chips.
But the company had to choose: the “solutions” and “chips” strategies, for example, were diametrically opposed. DEC’s CEO Ken Olsen made the mistake of asking the discussion group to reach a consensus, and it finally arrived at a truly Dilbertian masterpiece of fluff: “DEC is committed to providing high-quality products and services and being a leader in data processing.” Shortly after, Olsen was fired. And a few years later DEC itself was acquired by Compaq (which, in turn, was acquired by Hewlett-Packard). Even Nelson could have told DEC that it was making a big strategic mistake.
Rumelt — like Michael E Porter, the Harvard Business School strategy expert — believes that there are only two ways for companies to achieve long-term success: they must either invent their way to it, or they must exploit some change in their business environment, whether in technology, consumer tastes, competitive activity, pricing or laws, and “ride that change with quickness and skill”. The second route is usually more do-able.
Good Strategy/Bad Strategy is obviously of importance to any corporate strategist today. It is also, less obviously, of importance to strategy-makers in fields like policy and politics. The Congress party would do well to read it before the BJP does. And vice versa.