REVIEW OF 'IMAGINE' - HOW CREATIVITY WORKS, BY JONAH LEHRER. PHILOSOPHER AND NEUROSCIENTIST JONAH LEHRER MAKES A COMPELLING CASE TO EXPLAIN WHY CREATIVITY IS NOT A SPECIAL GIFT, AND HOW
IT CAN BE CULTIVATED

David Ogilvy hated the word “creativity”, which, he pointed out, wasn’t even there in the dictionary until a few years ago. The earliest work on how to be more creative was done in the 1930s and 1940s by advertising men James Webb Young and Alex Osborne, but interest in the subject really started in the late 1950s when the Americans suddenly realised that they had fallen behind the Russians in the space race. In today’s pressure-cooker world of business, creativity is a subject of great interest for everyone from entrepreneurs to bankers: suddenly everybody realises they need to be more creative. Which is what makes Imagine the right book at the right time. 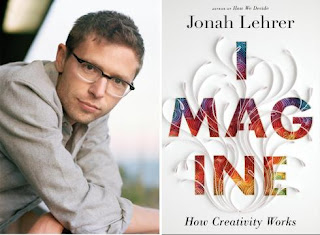 The basic premise of this acclaimed book is that creativity is not a gift one is born with; anybody can be creative, if he only learns what to do. Jonah Lehrer, the author, trained as a neuroscientist and philosopher and he now writes for publications like Scientific American, Wired and the New Yorker. He takes us on a journey from the neuron to the classical symphony, revealing in the process the amazing potential of the human mind and what we can do with it.
Lehrer brings in a wealth of scientific and sociological research, along with an eclectic mix of examples and cases. For example, how Procter & Gamble invented its blockbuster floor-cleaner, the Swiffer. How Bob Dylan brought himself back from the verge of creative burnout. How Steve Jobs designed the offices of Pixar to encourage creativity. And how Don Lee became one of New York’s most sought-after bartenders by thinking like a chemist, not a bartender (and inventing award-winning cocktails, like rum-and-Coke with melted butter and popcorn). Lehrer then presents all of this in a slick pop-pundit style reminiscent of Malcolm Gladwell. It is a killer formula. 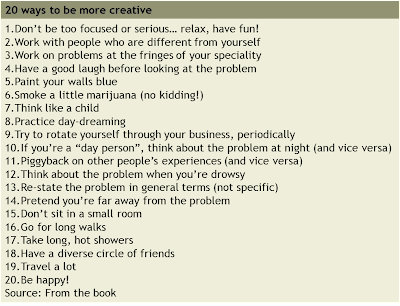 The creative process is notoriously mysterious and unreliable, as even the most “creative” people will tell you. But Lehrer argues that creativity can be studied and understood and, what’s more, it can be nurtured and cultivated. Everybody, in other words, has a creative “button” that they can learn to push at will.
The book is divided into two parts: “Alone” and “Together”. They explore, respectively, how we can learn to be more creative as individuals and collectively, in groups. Lehrer interweaves the narrative with thought-provoking examples of creative people, like William Shakespeare, cellist Yo Yo Ma and Spencer Silver, the inventor of Post-It notes, as well as of innovative organisations like Apple, 3M, Google and Innocentive, the well-known crowd-sourcing website that is an important R&D tool for companies like Eli Lilly, GE and P&G.
One important point that Lehrer makes is that there is no one single thing called creativity. Creativity is made up, instead, of a variety of distinct processes, each of which we need to understand and activate. (As creativity guru Roger von Oech put it, there are four separate, serial roles to play, of “Explorer”, “Artist”, “Judge” and “Warrior”. Or, as Edward de Bono has it, we need to successively put on our “Six Thinking Hats”.) Lehrer goes on to present concepts like “alpha waves”, “incubation”, “conceptual blending”, “horizontal sharing”, “rotation” and “collisions”, all of which mark the difference between the commonplace and the creative. He also assures us along the way that, yes, smoking a little marijuana can help us come up with a more innovative solution to the problem at hand. Alcohol, on the other hand, will hinder us.
I have one small problem with this book. Lehrer tries to discredit the technique of “brainstorming”, saying that it does not really work. Having run several brainstorming workshops myself — and having seen the remarkable results they can produce — I disagree. Brainstorming, when used according to the techniques of Alex Osborne, its inventor, remains one of the most powerful creativity tools there is.
To take just one example, in 1996 when Coca-Cola was sponsoring the cricket World Cup, the advertising agency I worked for got a sudden opportunity to pitch for Pepsi’s business. We needed to come up with a real breakthrough idea, but had just about 48 hours to present our campaign. I did a brainstorming workshop in the agency. And within 20 minutes we cracked the idea: if Coke was the “official drink” of the World Cup, Pepsi needed to be the “un-official drink” of the World Cup. It fitted Pepsi’s irreverent positioning perfectly, and could demolish Coke every time it sponsored any event, anywhere in the world. We presented this to Pepsi, who listened in stunned silence. Thank you, they said finally, but please destroy all these creatives, and swear you won’t talk about this idea to anybody: you see, we’d briefed our current agency long ago, and this is exactly the same idea that they’ve been working on for three months now, in top secrecy. And that, of course, was the famous “Nothing official about it” campaign — a version of which we had arrived at, entirely independently, in a fraction of the time. Brainstorming was the tool that made that possible. Which is why it has become a way of life at, for example, Ideo, the celebrated US industrial design firm, whose creative product is so highly respected that the firm has diversified into the creative consultancy business as well.
No, Imagine may not be the ultimate bible on creativity that the buzz is making it out to be. But it is an excellent book, and essential reading for anyone in business today.

This article appeared in Business Standard, May 12 2012
http://www.business-standard.com/article/beyond-business/instant-creativity-112051200036_1.html