The low, familiar beats of bass, the rhythm of rap and the cadence of language. Walls splattered with neon codes, graffiti signed off by the now familiar “Daku” on Delhi’s streets and signatures that herald members of the ‘hood’.

Step in to Dharavi, Mumbai’s largest slum or the Khirkee Village in Delhi and you will sense a ‘vibe’ that is almost palpable – youngsters spin and get down to the Hip-Hop beat, they celebrate a new found passion that offers them a ticket to express freely, make a mark and set themselves apart. The spirit behind this new movement is the compulsion to move beyond poverty and to break open the limitations of life. 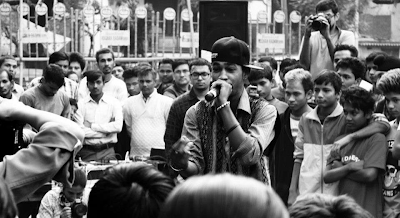 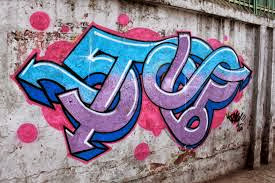 The seeds of this movement were sown by B-Boy Heera, now 30 and living in Delhi, who honed his moves growing up in Queens, New York. According to a recent interview by the AFP, Heera moved back to India in the 2000s and while visiting Dharavi with a friend, Heera realized that the youth of Dharavi needed an outlet for the swell of stemmed energy they carried within themselves. That belief led him and his friend Akku to set up ‘Slumgods’, which now has 40 to 50 core members, across the cities of Mumbai, New Delhi, Bangalore and Dharmashala. The crew works hand-in-hand with Tiny Drops, a non-profit group founded by Heera in Dharavi and his Delhi neighbourhood, to let kids explore the world of Hip-Hop.

In Mumbai, the crumbling ruins of Sion Hillock Fort is the Slum Gods’ den. Today the fort stands tall as the new bastion for self-expression, an open space for the youth to connect, encourage and express to their hearts content.


Historically, Hip-Hop has been a product of cultural integration, with definitive origins at the Bronx in New York around the late 1950s and with firm roots within African cultural history and oral traditions. All-encompassing in its sway from fashion, music and a way of life, it’s free flowing and adaptive nature points to a genealogy that is hardly linear but one that spans cross- cultural influences. Its continuous development, over the years, reflects a trajectory of give and take, where aspects of cultural specificity are seamlessly woven into the basic fabric of the genre.The sway of Hip-Hop culture hit India during the 80s and since then it has made a radical space for itself combining indigenous influences along the way. The ‘Baraat’ and the free styling of the 1980 Bollywood heroes especially the likes of “Mithun da”and ‘Govinda’ reflect an inherent alignment towards break-dancing. But the streets are where this urban underground movement really thrives, here talent is raw and passion is prime.

For some, Hip – Hop inspires to keep life simple and addiction free for others it’s a source of empowerment and an outlet for bottled passions. However, while the Hip- Hop movement in India continues to spread, there are a few daunting questions that need answers – Will Hip–Hop for the disadvantaged youth in India offer integration or further alienation? Will notions of identity bear further complexities? And more importantly will this passion shape a better future, from a socio-economic point of view, for the generations to come?

The answers may lie in the future, but a simple recognition of the sheer passion that drives this burgeoning movement could create a constructive road-map for this spirited subculture to grow, empower and ultimately thrive within the streets of India.