Navonil Chatterjee, JWT Planning, Bangalore shares the thinking behind the award winning Nike TV commercial, on behalf of the Nike Team in JWT Bangalore.
Hardly a Walk in the Park : The Challenge
In a country where the Jordans, the Federers, the Nadals and the Rooneys could not help Nike much, it was imperative for the brand to be associated with Indian cricket in order to make inroads into the market. Besides, Reebok and Adidas had a head-start over Nike and had also signed up almost all the major cricketing superstars of India. It was in this challenging environment in December 2005 that Nike successfully bid to be the official apparel sponsor of the entire Indian cricket team for a period of 5 years.
The team sponsorship undoubtedly gave us an opportunity to drive visibility, credibility and even acceptability for the brand. But the biggest task for us was how to make the brand stand apart from a plethora of other cricket-based commercials? Especially given the fact that in India almost every third ad - from soaps to bikes, from shampoos to cars, from credit cards to televisions, from colas to insurance - features one cricketer or another!
The Search for a Point of View (POV) : What JWT DidWe soon realized that to stand out in this cricket clutter, we needed to have our own unique POV on the game itself. What was this game truly about? We contacted every possible stakeholder of the game in trying to answer this one question …We asked ourselves … what are the greatest moments of cricket for us?We debated … what stood out in these moments?We interviewed … top Indian cricketers like Sachin Tendulkar, Sourav Ganguly, Jawagal Srinath, Anil Kumble and also met past Indian greatsWe spoke … with cricket commentators like Harsha Bhogle and Charu SharmaWe observed Cricket Crazy Kids training at the National Cricket AcademyWe wrote … to cricketers and coaches in every test playing nation in the world to check their take on the game, and even did focus groups amongst some of them …Character Over Cover DriveAfter tapping through all the responses, we realized that the abiding moments of cricket are those where character prevailed over cover drive, temperament took precedence over technique, fighting spirit reigned over flamboyance and grit glowed over timing.
Moments like Kumble bowling his heart out with a fractured jaw, Sehwag refusing to play it safe and risking a six when approaching a triple century, Yuvraj and Kaif relishing the pressure in the Natwest run-chase or the VVS Laxman-inspired epic turn-around against the all-conquering Australians at the Eden Gardens.We realized that cricket is not just about skill and brilliance and timing alone.
It is about context, about handling pressure. 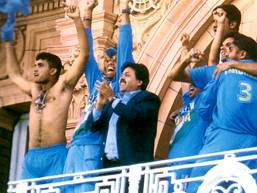 That it is not just a game of bat and ball. Rather, it’s all about balls.
And it is from this realization that Nike’s POV on cricket was born: GUTSY CRICKET!
Celebrating Gutsy Cricket : The Communication
Our commercial then when went on to dramatize that POV instead of indulging in the usual ‘Come on India’ kind of jingoism. However, given that cricket is a religion in India, in the brand’s first foray into the Indian market, we chose to ‘CELEBRATE’ gutsy cricket instead of making it grim and over-intense. And an Indian traffic jam served as the perfect amphitheatre for this celebration of a spectacular and yet gutsy brand of cricket. 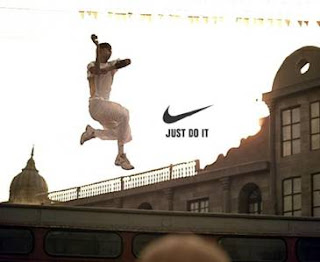 Just Did It : The Results
The effects of the commercial were clearly not gone in 120 seconds. Sales showed a 40% growth in the activity period over last year, 60% of the Nike Team India jerseys were sold out within 10 days of the launch, Nike got the maximum free media coverage (around 180,000 USD).
There was unprecedented buzz – the commercial was displayed 16 times on a YouTube page and had close to half a million hits. It became the most debated ad on agencyfaqs. There were communities in Orkut and innumerable number of blogs on the ad.
at 4:31 PM