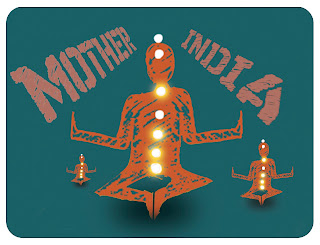 The Indian Mother-and-Child is now a team with a shared vision, with mothers actively believing they can shape their children’s destiny for mutual benefit, says the latest JWT Brand Chakras™ study.
Close on the heels of The Power and the Glory, which studied the Global Indian, JWT now looks at payoffs that mothers want from their children and vice versa, through Brand Chakras™.

The insight mining exercise was done in eight centers - Chennai, Delhi, Mumbai, Kolkatta, Kanpur, Hyderabad, Ahmedabad, Trichur, and covered SEC A, B mothers with children between 8 and 16, through group discussions, and depth interviews with pairs of mothers and their children.

Enabling and empowering, coach and companion, event manager and project manager, motherhood has moved beyond protection, nurturance, compassion and selflessness. The child is now a project and a mission, and industriousness, determination, passion and planning are the dominant traits. The children too are taking the roti- kapada-makaan for granted and are looking to the mother to give them the headstart they need in life and ensure that they remain focused.

Other shifts include: from living for the moment to constantly shaping the future; from child’s success to shared glory; and a clear staking of claims on the eligibility for the fruits of success.

Emotional elasticity, reasonable adult-like conversations, retaining locus of control while appearing to be democratic, love that includes toughness and a steeling of the heart, are some of the mother’s strategies.

Children in return are conscious of the contribution that their mothers make in their current lives by donning the roles of organizer, guide, enforcer, and friend. While there may be the usual squabbles over food, outings and social activities, children do indeed look to their mothers to give them courage, inspiration, help them set and achieve their goals and fill them with a will to win. Mother is both cushion and launch pad… giving new meaning to the famous line “mere paas maa hai”! They seem to be defining success in terms of living up to the mother’s expectations. Though, “itna tenson nahin lene ka” is also something they’d like to say to the mothers!

All mothers showed a strong inclination to Power chakra qualities, but three types of mothers emerged:
The Lifeline Seeker: she has given up hopes of the husband improving their lives and is totally dependant on the child to rise to glorious levels and rescue her; looking for insurance and security, she will do everything she can to help them in this journey, but is clearly establishing her rights to the fruits of this labour.
The Coronation Seekers: she is hoping her child’s achievements will bring her out of a life of oblivion and bestow on her a halo for greater social conquest… the child is an opportunity to make an overwhelming statement about herself.
The Independence Seeker: her striving to excel in the mother role is geared to fostering independence and self-reliance in her child, so that she will have the freedom and space for her own pursuits; motherhood enhances her efficiency and gives her exposure that helps her discover unexplored facets of herself.

The implication for brands is that:
*brands need not necessarily choose between mother or child as target but could talk to the duo; *must reflect the new sets of motherhood values and attitudes;
*need to find a role in the shared vision and future that they are chasing;
*salute the mother, Maa thujhe salaam for a new set of reasons;
*connect with the philosophy of effort and determination that she is trying to instill;
*focus on the 15 Chakra payoffs that children chose from the battery of 60 fundamental payoffs; *draw from the mothers’ behaviour codes across the seven chakras that the study has identified. 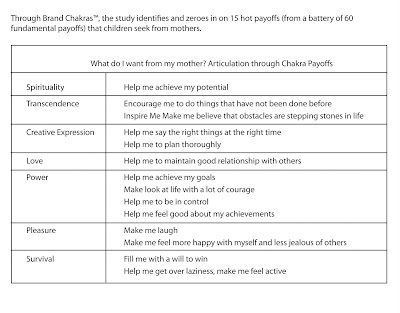 While the study focused on mothers, it has revealed three types of fathers too – according to the mothers!
The Genuine Partner: who tries to play a synergistic role willingly taking up activities which are beyond the mother’s competence;
The Conveniently Detached: who is taking it easy, capitalizing on the mother’s high involvement and taking up the provider stance to negate criticism of his lack of involvement; and
The Cynically Detached: who disagrees with the approach, perceives the mother as crossing the line and fostering too much dependance, and feels children need a more hands-off approach.

Brand Chakras™ is the first Indian strategic planning tool that applies the 2000 year old chakra system as laid out by Patanjali, to consumers and brands. This original system of understanding human behaviour based on the seven major nerve/energy centers in the human body has never been used in marketing, and is an initiative of Strategic Planning at JWT India. http://www.brandchakras.com/
For further information, write to Mythili.Chandrasekar@jwt.com
at 4:41 PM