India is booming faster than a trained brain can follow so we need to train differently to solve faster. Our aim is to widen people's perceptions and fertilize ideas.
Every month a guest speaker is invited to talk to all JWTers on a curious topic. Like a sponge, each of us will absorb the material in our own way. Here is a glimpse of our exciting aqua experiences so far!
November 2007
Injector: Hormazd Sorabjee
Container: Autocar India
Water: the car market as a mirror of the economy
Absorption: Looking at which and how many cars are on the road is a good indication of the national economy’s health but also consumer’s behaviour. It appears that quality is not always the prime incentive, status is. However, we are more inclined to a uniform consumption rather than individualistic as 65% purchases are influenced by word of mouth.
On another note, the car market is a laughable example of foreign products lacking adaptation to the market’s specificities as luxury cars are designed to be driven, not chauffeured. The back suspensions are hard and there is no remote for the stereo, so where is the fun in that? 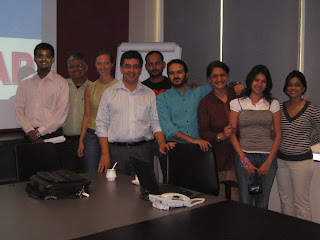 Absorption: India’s equity is building up everyday, distancing itself from China, the all time point of comparison. This being said, some worries remain in foreign investors minds: Will the widening wealth gap lead to social tensions? Also, while the economy grows fast, the education system does not follow. How will industries overcome the lack of qualified labour? 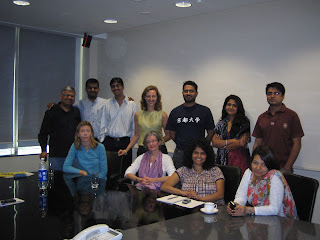 January 2008
Injector: Mahesh Bhatt
Container: Bollywood
Water: the right message for the right crowd
Absorption: Real India feels alienated. Gate keepers, whereas they are distributors or our clients, are not ready for changes whilst people are. The population cannot identify to the portrayed image. For instance, when poverty still exists in India, it does not in Indian media as the poor are party spoilers! The real world has no space in the dream world. Research only takes you so far. The bucket of water has all the properties of the stream of water except the key one. The bucket of water does not have the “flow”! So always be careful of research it often captures the capturable but not the “essence”. Standards – keep them high. There is such a thing as success backwards and failing forwards! i.e. Even though you momentarily appear to fail it is actually something very progressive. And sometimes even when you have market success, it might be a regressive idea 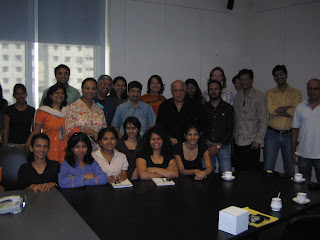 February 2008
Injector: Jim James
Container: Haymarket India
Water: Formula 1
Absorption: Formula 1 does not run on fuel but on advertising. It is the most watched sports even after the Olympics and the Football worldcup. It has a huge advantage over these two – while they happen once in four years, Formula 1 takes place 18 times a year! However much the sport seems to cost their sponsors, given the coverage they get, the returns are high. Infact, the recent sponsorhip by Vijay Mallya of Formula 1 got so much coverage they recovered their investment even before the car spun a wheel! This is why Marlboro still sponsors Ferrari despite the ban on cigarette advertisement in most countries, limiting their visual presence to the color code shared with Ferrari. 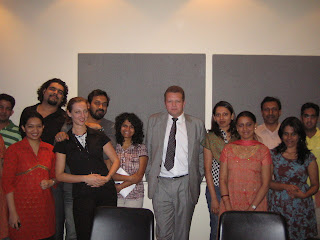