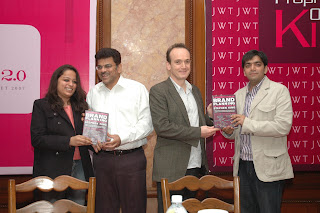 The meet saw the launch of the book "A Master Class in Brand Planning: The Timeless Works of Stephen King". Prophecies of the King, an evening with the media was a celebration of the life of a man regarded as the father of account planning. In the picture you see Shweta and Vishal, two of the youngest planners, receiving the first copies of the book form Guy Murphy, and Rohit Ohri, managing Partnet, JWT Delhi.

Published by Wiley, the book contains 20 of King’s most important articles. Each one is introduced by a respected practitioner who describes the relevance of the article to the communications environment today. The contributors include professionals from Ogilvy, WPP, Marketing Society, Market Leader, Interbrand, Mindshare, BBDO andJWT among others.
For those who may not know, King was the originator of the discipline of Account Planning – he gave the advertising industry the thinking and the theory it needed, and the organisational structure that exists even today. In fact, when he was in Delhi in 1992, an invitation to hear him speak at the Ad Club said," … advertising has many gurus, many professors, many geniuses, and many mavericks. But only one King”!

What he said about advertising

“Don’t measure what advertising does to people, start at the other end and ask what people do with ads.”

“If advertising is to succeed, it has to involve the receiver and entice him into participating actively in whatever is being communicated about the brand. It has to stretch his imagination and make him an accomplice.”

“ Advertisements compete not only with other advertisements but also with editorial, programmes, people, events and life itself… all of us spend our lives subconsciously zapping what we have decided almost instantaneoulsly , not to be interested in”.

What he said about consumers

“Consumers nowadays are extremely expert in advertising; they see a great deal of it and they have quite precise – and usually accurate – ideas about what it’s for. Again and again research has shown them analyzing advertisements much as agency people or brand managers do, often using the same jargon. They show skills in decoding visual imagery, working out the strategy, picking up clues, seeing the company behind the brand, accepting quick cuts, recognizing the actors in voice-overs, and so on.
What has changed most in recent years is that today they are more inclined to believe that not just the brand but advertising itself should give them some sort of reward – aesthetic, emotional or intellectual. They see advertisements not only as a medium through which company talks to them but also as part of the style, skills and personality of the company itself. To them, the style of the advertising is as much a part of a brand as the pack is.”

Glimpses form the book flap
“The book tells the modern young planner in these pressed times who they are and what they should be.”
- Malcolm White, Planning Partner, Krowe
"What is a Brand?’ by Stephen King was one of the most influential pieces of work ever and has had a lasting influence on the way in which I think about brands. A few years ago I had the extraordinary experience of re-visiting the video of it made by Stephen and Jeremy Bullmore and the stunning thing was how prescient they had been some thirty years previously.
- Hamish Pringle, Director General, IPA
"King’s relentless thirst to understand, rigour of questioning and breadth of learning remain an inspiration. A profoundly rewarding, and rather humbling read.
- Adam Morgan, author of Eat the Big Fish, and The Pirate Inside

Media coverage on the book launch
http://www.agencyfaqs.com/main1.html
http://www.exchange4media.com/e4m/news/newfullstory.asp?section_id=1&news_id=28879&tag=23786
at 4:28 PM